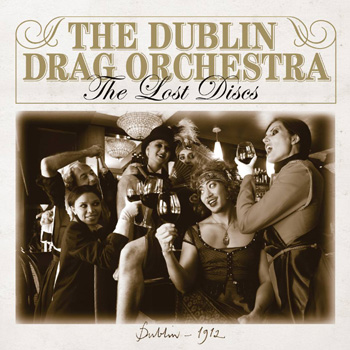 “ Musical standards are high, their programming ingenious and their photos are terrific.” Warwick Thompson, Metro London

Newly unearthed recordings for the holiday season by The Dublin Drag Orchestra and the digital follow up to their sensational debut double album Motion of the Heart and Viva Frida!

Discovered at an auction at Christies in Dublin in 2012, The Lost Discs of 1912 feature rare music by the early baroque masters, Marc-Antoine Charpentier and Luigi Rossi. The Lost Discs is the digital EP from the Limited Edition vinyl singles, Christmas 1912 and One Minute to Midnight 1912.  Recorded at a time of joie de vivre  and celebration, a time when the world danced on the volcano and would soon fall into the abyss of tragedy and war.

Al Imperio d’Amore (The empire of love), is a rousing chaconne that takes place before Euridice is killed by a snakebite.

Orfeo is the second of Rossi’s two operas. It was written after he was invited by Cardinal Mazarin in 1646 to go to Paris for that purpose. Orfeo premiered at the Théâtre du Palais-Royal in Paris on 2 March 1647. It was one of the earliest operas to be staged in France and its extravagant production was said to have been a contributing cause of the rebellion against Mazarin known as the Fronde.

While Charpentier is regarded as one of the foremost composers of late 17th France, little of his remarkable liturgical music is known. The sublime Litanies de la Vierge, also known as the Litany of Loreto, are nine motets scored for a variety of vocal and instrumental forces ranging from settings for 3 to 6 voices. It was probably composed during the early to mid 1680s and intended for musicians in the service of the Duchesse de Guise whom Charpentier was serving at the time.

The version performed by The Dublin Drag Orchestra is for 3 voices (Alto, Tenor, Bass), viol consort and continuo.

4. From the Ouverture to the opera Médée – Marc-Antoine Charpentier