Known for his pioneering work as a composer of electronic music, Roger has worked extensively in theatre, film and dance, in particular, with the music theatre company Operating Theatre, which he co-founded with the actress Olwen Fouéré.

His magnum opus is ‘Babel’, which took ten years to compose, was released on a 5-CD set in 1999, and contains 103 pieces of music. It is a celebration of the multiplicity of musical language and evolving technologies.

His score for the Gate Theatre’s production of Salomé – which he performed on-stage – and was directed by Steven Berkoff, played in Dublin, London’s West End and on three world tours. 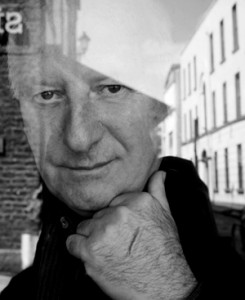 He has performed concerts of his music on piano in Paris, Beijing, New York, Amsterdam and Dublin. The Netherlands Wind Ensemble have commissioned and twice toured his music, most recently in 2014 at the Concertgebouw Amsterdam.

Roger’s recent works include a series of soundtracks for imaginary films – a cinema for the ear – for the RTÉ National Symphony Orchestra and Crash Ensemble.

His first opera, HERESY, based on the life and works of the renaissance heretic, Giordano Bruno, was premiered at Project Arts Centre, Dublin in 2016 and on RTÉ Lyric fm the following year.

In 2007 he was awarded the Magisterium Prize at the Bourges Electro-acoustic Music Competition, France. He is a member of Aosdána, Ireland’s state-sponsored academy of creative artists and is Adjunct Professor of Music at Trinity College, Dublin.

Roger has released two recordings for Heresy Records, TIME MACHINE (August 2015) and HERESY (February 2018) – he is also featured on the anthologies ON THE NATURE OF ELECTRICITY & ACOUSITICS (March 2013) and A MAP OF THE KINGDOM OF IRELAND (March 2018).