The Rev Dr Peter Cameron is the only man to have been convicted of Christian heresy in the twentieth century, or for that matter the twenty-first. When the Presbyterian Church of Australia tried him for heresy in 1993, the trial became something of a national fascination.

Dr Cameron, who was born in Scotland in 1945, read Law at the University of Edinburgh before studying theology at both Edinburgh and Cambridge. He worked for a time as a public prosecutor in Dundee, only becoming ordained as a minister in the Church of Scotland (Presbyterian) in 1984. 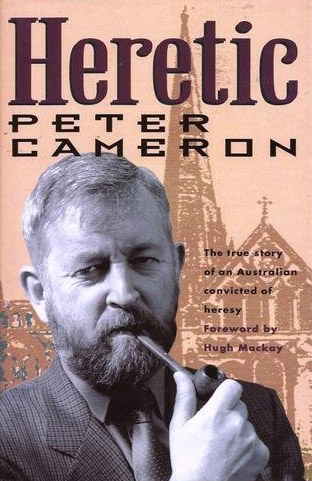 At the start of 1991, Dr Cameron and his family relocated to Sydney, Australia so that he could take up the post of Principal at St Andrew’s College, University of Sydney. Seven months later, the General Assembly of the Presbyterian Church of Australia voted to reverse a seventeen-year-old policy of ordaining women as ministers (De Maria). So when Dr Cameron delivered a sermon on 2 March 1992 at Ashfield Church just outside of Sydney, the issue was still fresh in people’s minds.

Dr Cameron’s sermon was entitled ‘The Place of Women in the Church’, and it argued strenuously for the right of women to be ordained. In refuting Paul’s ‘First Letter to Timothy’ 2:13 (‘I permit no woman to teach or to have authority over men; she is to keep silent’), Dr Cameron suggested that ‘it is actually possible that he [Paul] got things wrong. There is no reason why Paul should have been infallible… However much people quote 1 Timothy 2:13, the answer should simply be: “So what?”’ That was Cameron’s crime, according to the Sydney Presbytery – he dared to question the infallibility of the Bible.

Cameron’s mistake was to assume that the Presbyterian Church of Australia would agree with him that ‘there is…nothing wrong with a church containing a range of theological opinion’. Dr Cameron was wrong about that.

The minister was charged with and convicted of heresy in 1993, and he lost an appeal in June of that year. He wrote a memoir about the experience, Heretic, which was published in 1994, the same year he resigned from the ministry of Presbyterian Church of Australia. On the subject of his resignation, Dr Cameron commented: ‘It was said some years ago that God was dead. It might not be quite absurd now to proclaim the death of the Church’. Those are fighting words coming from a man who still considered himself a minister.

Indeed, Cameron remained defiant. In 1995, upon the publication of another book, Fundamentalism and Freedom, he described the sort of fundamentalism that drove him from the Church: ‘Fundamentalism is demonic, and can only be met with the sword, or at least with a vitriolic pen’. In the same interview, Dr Cameron decried the ‘herd instinct’ of fundamentalist Christians and their ‘unquestioning acceptance of authority’, and suggested that it is ‘silly to insist that people accept the literal truth of the Virgin Birth of Jesus’. Dr Cameron continued: ‘Fundamentalism is a kind of New Age religion or phenomenon in itself. They involve no sort of moral commitment or intellectual content. What they purport to offer is some sort of instant answer’.

Dr Cameron professed to not being optimistic about the future of Christianity, but it is worth noting that in 1992, the same year as his heretical sermon, the first female priests were appointed in Australia, England, and South Africa, albeit in Anglican churches. In 1996, Dr Cameron returned to Scotland. He has left the Church of Scotland to become ordained in the Scottish Episcopal Church (Anglican) instead.

Social commentator Hugh McKay has observed that ‘Peter Cameron was a victim of circumstances which did not favour boat-rockers and whistle-blowers. He came onto the scene at a time when many people were looking for some relief from uncertainty, rather than a new set of questions to face’. It is worth noting that Mr McKay’s twentieth-century observation could perhaps be applied to Michael Servetus’ sixteenth-century experiences too.
Blair Hamren