A Spanish physician and theologian, Michael Servetus enjoyed the distinction of being persecuted by both Catholics and Protestants in an age when the two groups agreed on hardly anything.

Born in Villanueva, Aragon in 1511, Servetus began his career in heresy early, at the age of twenty, with the publication of his De Trinitatis Erroribus (1531). In this work, Servetus disavowed the existence of the Holy Trinity. The Church had been wary of this particular criticism of Christian orthodoxy ever since the Arian controversy in the fourth and fifth centuries, so it should not have surprised Servetus when the Spanish Inquisition ordered his arrest on 24 May 1532 – indeed, he had the foresight to be out of the country by this time. 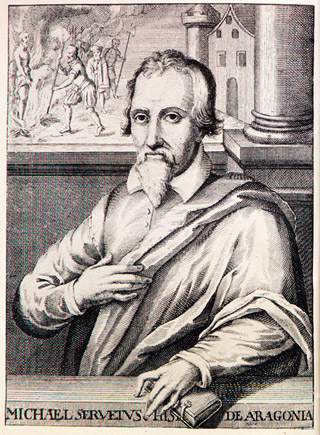 The historian G. R. Elton has suggested that the Spanish persecution of heretics at this time ‘had rapidly become nothing but a general and obscurantist attack on any form of intellectual enterprise or independence’. Regardless, Servetus was unrepentant; he wrote an apology that same year entitled Dialogorum de Trinitate in which he did not apologise at all, but merely restated his original views, with some additions.

The Spaniard studied medicine in Paris for some years before commencing extensive travels throughout Europe. During this time, he engaged in correspondence with the reformer John Calvin, although the two disagreed on several vital theological points. Servetus eventually settled in Vienne, France, where he worked as the personal physician to Pierre Palmier, Archbishop of Vienne.

In 1553 Servetus published his magnum opus, Christianismi Restitutio, which was partly aimed at Calvin’s Institutes. Servetus again expressed doubt about the literal existence of the Trinity, which at the time was interpreted by Catholics and Protestants alike as denying the divinity of Christ. This was universally agreed to be a dangerous heresy indeed.

At this point, Servetus’ apparent lack of interpersonal skills, combined with his obstinate insistence on the validity of his theological views, landed him in an alarming situation. His relationship with Calvin over the years could at best be described as strained. (Once, Calvin risked his life to meet with Servetus in Paris – Calvin had been sentenced to death in his native France – in order to ‘gain him [Servetus] for the Lord’ …and Servetus stood him up). Restitutio was the last straw for Calvin, who tipped off Catholic authorities in Vienne that the archbishop’s physician who went by the name ‘Dr Villeneuve’ was actually Servetus. The French Inquisition promptly arrested Servetus on 4 April 1553.

Three days later, Servetus escaped from jail. Then he did something even more amazing. En route to the safe haven of Italy, Servetus inexplicably decided to stop in Geneva, home city to his now enemy, Calvin. Servetus brazenly attended one of Calvin’s sermons, and of course he was recognised. Genevan authorities immediately arrested Servetus. The French Inquisition requested that he be extradited back to France to face the charges against him there. Such was French vitriol towards Servetus that he had been convicted of heresy in absentia and burned in effigy along with his books.

But Calvin was navigating a power struggle in Geneva, and he had to demonstrate that he could deal with heretics just as effectively as the Catholic Church. Therefore Servetus was shown no mercy. On 27 October 1553 Michael Servetus was sentenced to death. He was burnt at the stake on the outskirts of Geneva shortly before noon that same day, the supposed last copy of Restitutio chained to his leg. Servetus would not recant even as he was consumed by the flames. His last words were allegedly: ‘Jesu, thou Son of the eternal God, have mercy on me!’ The heretic died for his right to distinguish between the son and the eternal god.

With Servetus’ death, Calvin achieved complete control in Geneva. His opponents, known as the ‘Libertines’, had taken Servetus’ side and were subsequently forced to leave the city. Calvin ruled Geneva unopposed for the rest of his life.

Ironically, the cause Servetus died for – namely, his anti-Trinitarian views – was not hugely influential in the grand scheme of history. G. R. Elton went so far as to describe Servetus’ theological influence on others as ‘negligible’, although Unitarianism eventually became a significant Christian movement. But perhaps Servetus’ greatest contribution was actually his discovery of pulmonary circulation. In Restitutio, Servetus posits correctly that blood travels from the right to the left ventricle via the lungs so that the blood might absorb the Holy Spirit, which Servetus believed to be, as it were, airborne. Previously, blood was thought to pass through the flesh between the ventricles. Clearly, Servetus was a talented doctor as well as a resolute heretic.
Blair Hamren

– Goldstone, Lawrence and Nancy. Out of the Flames: The Remarkable Story of a Fearless Scholar, a Fatal Heresy, and One of the Rarest Books in the World. New York: Broadway Books, 2002.