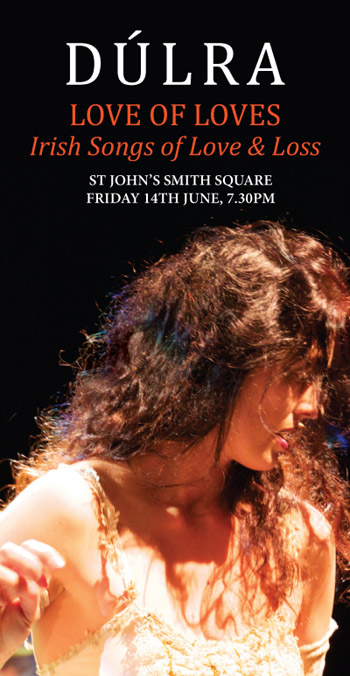 Supported by Culture Ireland and the Embassy of Ireland in Great Britain, acclaimed traditional Irish band DÚLRA featuring singer Caitríona O’Leary will perform a special concert on Friday 14th June at 7:30 PM at St. John’s Smith Square, London.  The concert is being held in celebration of Ireland’s six-month Presidency of the Council of the European Union which ends on 30th June 2013.

The concert entitled Love of Loves (Ansacht na nAnsacht) is a programme of rare traditional Irish vocal and instrumental works on the theme of Love and Loss including Suantraí (lullabies), Goltraí (Laments) and Geantraí (songs of Joy and rapture) from the 16th through the 20th centuries.  DÚLRA features some of Ireland’s leading traditional musicians including, renowned vocalist Caitríona O’Leary, fiddler, Adrian Hart, flute and whistle player Éamon Galldubh, cellist, Lioba Petrie, bodhrán player, Frank Torpey and Andrea Piccioni from Italy, a frequent collaborator of Ms. O’Leary’s who is considered the world’s greatest frame drummer.

“Do not hesitate for a second! Caitríona O’Leary has one of those incredibly crystalline voices that roots you to the spot” La Vie

ECSTASY review by hifi and records

“The recommendation “File under Audiophile” should be added to the back cover.”

“The recommendation on the back-cover states: “File under Traditional /World Music”. This target-group-definition for the pop market might obstruct the path to a larger audience for Dúlra (fiddle, cello, flute, percussion and other acoustic instruments), because with her Gaelic songs from the 16th to 18th century, the Irish singer Caitríona O’Leary is able to please fans of classical “Lieder” too. Her natural voice comes without frills and sounds at all times effortless. As well, there is never any danger that the archival material on the album is performed in an academic way.

Although this repertoire calls for it, the ensemble is not tempted to pander to the esoteric scene. Instead fans of Celtic Folk-Rock will get their money’s worth – when the urge for dancing and celebration rises up – with the rousing instrumental pieces performed by this band of soloists.

In addition to the performances, the production team has made the perfect choice by recording in a church, which leads to an ideal balance between translucent delicateness and lush substantial sound.

The recommendation “File under Audiophile” should be added to the back cover.” 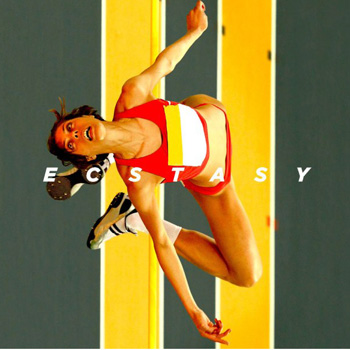